The Magnetismus II from Tegeler Audio Manufaktur, located in Berlin, is a VCA based Compressor with an  integrated Transient Shaper. The concept is to form the outgoing transients behind the Compressor to glue them better in the mix like a Tape Reel. 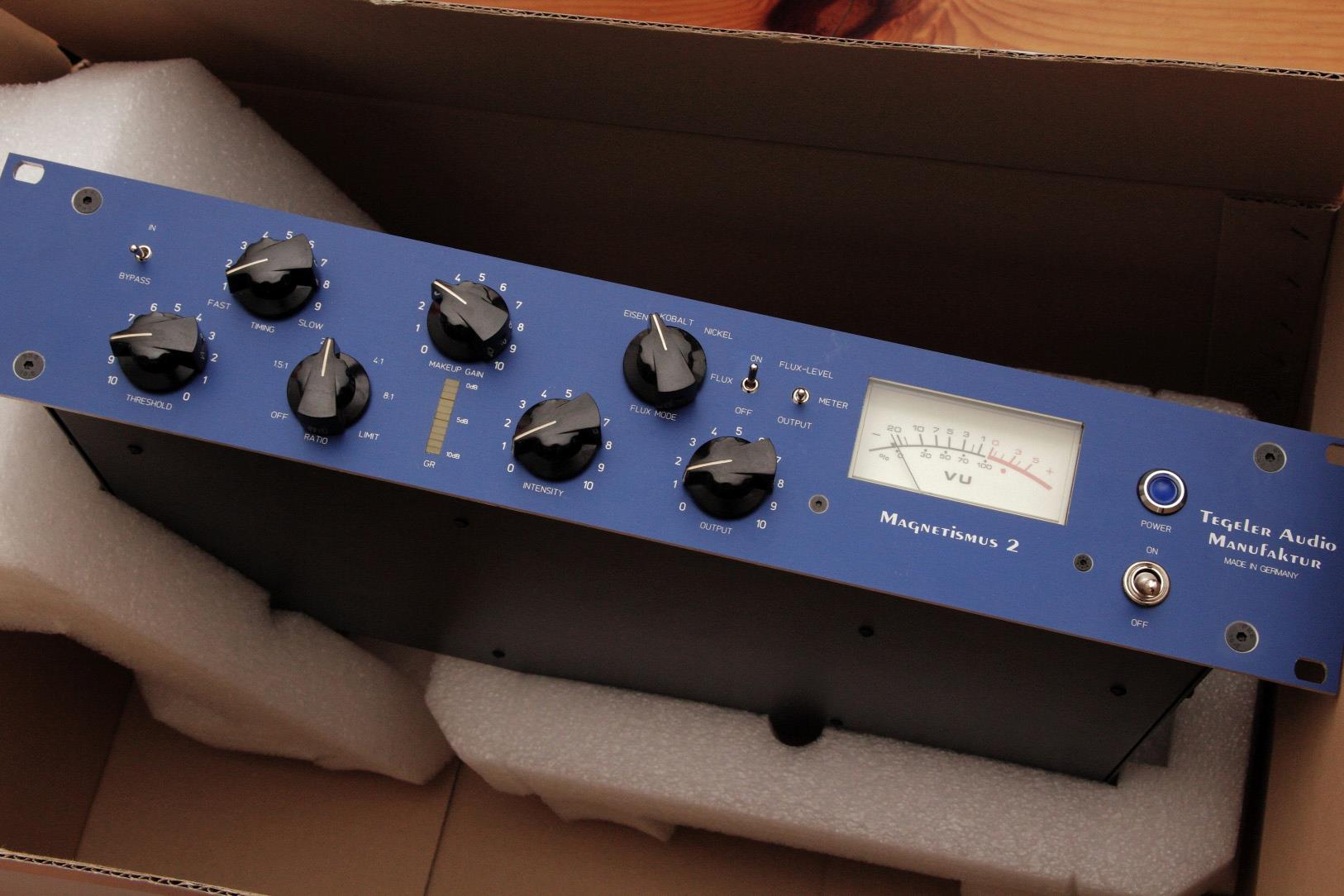 The Compressor part works fast, clean and very well like a normal VCA based compressor without coloring the sound. Apart from “attack” and “release”, all typical elements of a compressor are there. Attack and Release is combined in the “Time” knob which has a control range from 1 to 9, with higher numbers you get a slower attack and release times. There is no option to change the settings to a faster attack and slow release or a slow attack and short release times in example to safe transients while compressing. But for those who need an allround compressor for nearly everything in the mix, you’re right with the Magnetismus 2.The fastest attack time is 7ms and the fastest release time is 11ms. That is good enough for drums and percussions. If you change the Ratio knob to OFF there will be no compression. Ratio has the following values: 1.5:1, 2:1, 4:1, 8:1 and LIMIT. So you can also use the Mangetismus 2 as a limiter and that works great as well. Steps between all values are also easy to use because of the stepped potentiometers – quite nice for mastering!

The downstreamed Transient Shaper is documented by Tegeler Audio in the manual like this: With the Flux Mode Option you can change the width of transients that will be curved and edited by the Transient Shaper. The option Eisen has the biggest width while Nickel has the smallest amount. The transients will be pushed first to cut them down and curve or bend after that. You will get a similar sound like Tape Reel.I can confirm: that works well for bass heavy material or songs with much of high end. Eisen, Kobalt, Nickel are the options and they sounds different for different material. I think Eisen is the best for bass heavy material or to bring back an analogue feel and warmth to harsh sounding digital songs, because the high ends will be lower leveled there and the whole range of mids and basses receive a nice little distortion and you will get a rounder result. In combination with the make up gain on higher levels for some distortion till total destroying these flux function is KILLER! But also in combination with compression where you lost some high ends, you can try FLUX Mode in Kobalt or Nickel mode to bring back these high ends. It sounds similar to an exciter or like tape saturation with shelving the highs depends on value and intensity.

as WAV Format in 16bit 44Khz on archive.org

Pro
– nice look and feel
– typical VCA based clean sound. Magnetismus II is also great as a Sub/Grouping or Buss Compressor
– big and bright VU meter
– stepped Knobs and Potentiometers
– Flux / Transientshaper is a real added value
– Gainreduction and VU meter for Output and Flux Level seperated
– Make Up Gain and Output Knobs also seperated. Output is you Master Level and Make Up Gain only the intensity which goes into FLUX or for saturation and distortion
– Distortion with Make Up Gain sounds phat
– Ratio and/or Threshold on level zero and you can use it as normal Preamp/Saturator
– Flux also useable without using Compressor function
– Bypass will not mute the whole unit (good for inserts, the sound will only go through input – output)

Contra
– Timing indicator can be better. you have to read the manual
– no different Attack and Release times possible
– no Pre/Post mode for FLUX/Transient Shaper
– the digital LED chain for showing you the gainreduction is not very usefull.  They should better make it like a 1176LN where the VU-Meter shows the gain reduction or output next time.  This metering would be better for the FLUX level
– only XLR on the rear side. Some Neutrik Combi jacks would be better (XLR / TRS) and not much more expensive
– the Layout on the frontpanel is a bit confusing in the first time
– no reference for the Threshold Level (it is important for a compressor, but maybe ok, if you see it as a intuitive instrument/ machine)

This website uses cookies to improve your experience while you navigate through the website. Out of these, the cookies that are categorized as necessary are stored on your browser as they are essential for the working of basic functionalities of the website. We also use third-party cookies that help us analyze and understand how you use this website. These cookies will be stored in your browser only with your consent. You also have the option to opt-out of these cookies. But opting out of some of these cookies may affect your browsing experience.
Necessary immer aktiv
Necessary cookies are absolutely essential for the website to function properly. This category only includes cookies that ensures basic functionalities and security features of the website. These cookies do not store any personal information.
Non-necessary
Any cookies that may not be particularly necessary for the website to function and is used specifically to collect user personal data via analytics, ads, other embedded contents are termed as non-necessary cookies. It is mandatory to procure user consent prior to running these cookies on your website.
SPEICHERN & AKZEPTIEREN